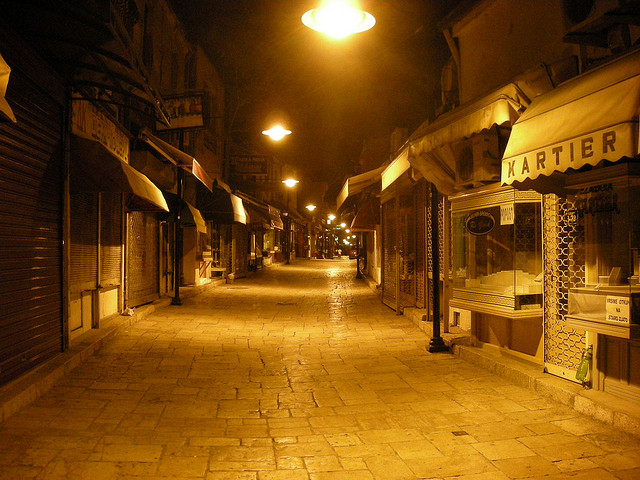 The Old Bazaar (Macedonian: Стара Чаршија, Stara Čaršija from the Turkish: Çarşı meaning marketplace, Albanian: Çarshia e Vjetër) in Skopje is the largest bazaar in the Balkans outside Istanbul. It is situated on the eastern bank of the Vardar River, stretching from the Stone Bridge to the Bit-Pazar and from the Skopje Fortress to the Serava river.

The Old Bazaar falls within the borders of Centar and Čair municipalities and is a protected national landmark.The earliest known documented sources that point out to the existence of a merchant quarter on the bazaar’s territory date back to the 12th century. During the Ottoman rule with the city, the place underwent a rapid development to become city’s main economic and merchant centre, evidenced by about 30 mosques, numerous caravanserais and hans, as well as other Ottoman buildings and monuments. The bazaar was heavily damaged by the earthquakes that occurred in 1555 and 1963, and the destructions caused during the First and the Second World War. Subsequently, it was reconstructed on several occasions and nowadays represents the only remaining cultural monument in the Republic of Macedonia, which has kept its multicultural heritage of different civilizations.

The Ottoman architecture is predominant in the Old Bazaar, although remains of the Byzantine architecture are evident as well, while the most recent reconstructions lead to the application of elements specific to the Modern architecture. Most of the buildings that once were used to host the travellers or as hamams[disambiguation needed] for the political dignitaries were transformed into museums and galleries, which today are used with the main purpose to host art exhibitions, concerts and other cultural events. Nowadays, however, the place and its proximity are still home to several mosques, türbes, two churches and a clocktower, that together with the buildings of the Museum of Macedonia and the Museum of Modern Art form the core of the modern bazaar. The Museum of the Skopje Old Bazaar, situated in Suli Han, includes collections of artifacts that evidence the life within the bazaar, its development, and the crafts that were practiced during its history.On 13 October 2008, the Macedonian Parliament adopted a law recognising the Skopje Old Bazaar as a cultural heritage of particular importance for the country with a permanent protection.

In early 2010, the Macedonian Government has commenced a programme for revitalisation of the Old Bazaar, which, in turn, includes restoration of several objects, providing support of the crafts, and aiming a further economic and cultural development of the site.